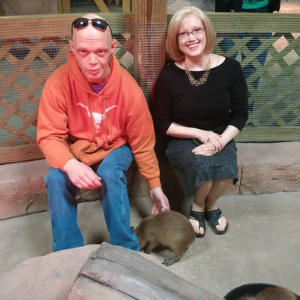 (Article reproduced courtesy of the National Foundation for Ectodermal Dysplasias, who originally published the article at NFED.org on January 14, 2020.)

The Van de Graaff machine seemed like something out of the Star Trek movie to my 1980s high school classmates and me. I watched as my classmates took their turns to place their hands on the globe, and we all laughed as their hair stood on end and they felt the static in their bodies. It was such a clean bit of fun.

When I stepped forward for my turn, though, I remember feeling nervous because I wore a wig. And I didn’t know if the machine worked on wigs! But as I touched the machine I felt nothing. Zero. Zip. Even my hair under my wig didn’t move a muscle.

It turned out that you have to have some natural moisture on your hands to attract the static in the machine. Who knew! Because of autosomal recessive hypohidrotic ectodermal dysplasia (ARHED), I never have moisture in my hands and am constantly putting lotion on after I wash them.

The Van de Graaff machine just didn’t work on me. The wig was all forgotten as my classmates were fascinated by my ability to touch the machine with no consequences. I found out later that my brother, Jefferson, who also has the same ARHED, had the same experience when he was in that grade.

My experience with the Van de Graaff machine prepared me for what I encountered years later when I joined the Curves workout program. That program uses a rotation of machines and rest stations for your workout. They are very big on you taking your pulse and making sure you stay within a range.

They encourage you to use the grip sensors on their machines when you’re on them to track your pulse as you go. Remembering my high school experience, I tried to tell the owner of the location where I joined that the grip sensors would not work on me. She dismissed me and insisted that I try.

Despite not wanting to put my hands on the germy sensors, I did it. Nothing happened. The machine didn’t register anything. She thought something was wrong with the machine. It became a teaching moment for me to share how God had designed my body. To her credit, she was humble and interested.

But none of the foregoing prepared me for what I experienced standing in front of a weapons carry class being fingerprinted so I could get my carry license. The instructor was a great guy with decades of law enforcement and weapons experience.

He began by fingerprinting the first four fingers of my right hand. After each one he frowned, moving even more slowly and carefully to roll nail to nail. By the time he got to my fourth finger, he concluded that I did not have distinct enough swirls to work on ink. I needed witch hazel to bring out my swirls or a digital fingerprinting process. He joked with me about having sandpapered off my fingerprints.

Honestly, I was a little embarrassed. I’d been fingerprinted years ago when I got my Texas law license. But nobody said a word back then. So the instructor sent me on my way. I happened to mention the situation to my brother, Jefferson, and he had the information I needed.

I pulled out my old fingerprint card from decades ago, and sure enough the broken swirls were obvious. My brother said the state of Texas probably didn’t care that my fingerprints looked odd back then because I wasn’t asking for a carry license.

My brother’s wisdom didn’t end with the swirls explanation, though. He pointed out to me that he’s never had the same grip as other people, and he attributes that to the broken swirls in his fingertips. I’d never thought of that either, frankly, but realized how correct he is. I’ve always struggled with hand sewing and embroidery when I’m pulling the needle through. The needles slip easily from my grasp. Again…Who knew!

What I know now is that God’s design for my brother and me as people with ARHED is even more special than I thought. That design really is in our hands…quite literally.

Lynne M. Thomas is a guest blogger for the National Foundation for Ectodermal Dysplasias (NFED).  She describes herself as a recovering attorney and full-time daughter and focuses on helping others get financial, time, and health freedom.  She lives in Fort Worth, Texas with her elderly mother, Barbara, and two feline children, Shakespeare and Tortellina.