The ED Society is run by a Board of Trustees, who meet twice a year and give their time voluntarily to ensure the mission of the ED Society becomes a reality. They aim to keep the ED Society moving forward, ensuring their work, including the finances and policies, are in line with the Charity Commission rules, and provide advice and support to the Office. If you are interested in becoming a Trustee, please contact us info@edsociety.co.uk

The Board of Trustees is supported by:

Stephen Ayland
Stephen brings a wealth of educational experience with him, having worked in the primary school sector throughout his teaching career. He retired from being Head Teacher of a junior school. He is married to Sally and they have 2 grown-up children and 2 grand-daughters. Stephen enjoys singing, walking and gardening.

Elaine lives in Ireland and has 3 boys one with Ectodermal Dysplasia. She has been a member of the Society for many years and has become the family contact for members throughout Ireland.

Stuart lives in Dudley and has a son with Ectodermal Dysplasia. He has done great work helping to support the Society and raise much needed funds.

Paul is a civil servant in Cheltenham and has experience in managerial, development and personnel management. One of his godsons is affected by Ectodermal Dysplasia and he first became involved with the Society in the transition to becoming a Charity. He was Chairman for the first year and took over the position again in 2011. Paul is married to Sarah and has 3 grown-up children. In his spare time Paul does lots of musical things and enjoys the odd crossword. 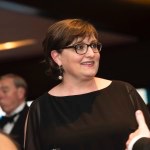 Sharon’s first involvement with the ED Society began when her daughter was diagnosed
with Ectodermal Dysplasia, and she has been a trustee since 2012. Sharon is the Chief Digital Officer for BMJ Publishing Group, where she is responsible for a portfolio of clinical online services that enable doctors to improve their knowledge and skills. She has a long background in publishing and technology, with much of her recent career involved in change management. Outside work Sharon is a keen baker.

Scott Gallacher lives in Leicester and is an award winning Chartered Financial Planner, personal finance expert and director of Rowley Turton (IFA) Ltd. He is an active member of the Rotary Club of Leicester. Scott is engaged to Eileen and they have 2 children, Ryan and Daniel, who both have X-linked Hypohidrotic Ectodermal Dysplasia.

Simon was born in 1966 with a cleft lip & palate, he grew up with all the problems associated with Ectodermal Dysplasia, without knowing anything about the condition until his second daughter was born. He is married with 2 daughters and is a Chartered Surveyor working for his family brewery and pub company in Manchester.

Andy has been a resident of Cheltenham for 26 years and is married with 4 children and 2 grand-children. He is a semi-retired former Sales Director of an Electronic Company selling into the aerospace industry. Andy is an active member of St. Mary with St. Matthew’s Church, Cheltenham. He is a former treasurer of the ED Society during its formative years and returned to the Trustee Board in 2017. Andy is also a School Governor at Cheltenham Bournside School and Sixth Form Centre. His hobbies include golf, more golf and still more golf, cycling, his Mazda MX5 and Charity work.

Alan is an accountant who lives in Cheltenham with his wife and 2 dogs. He has 3 children. Alan brings a wide range of accounting experience to the Society and has all the archetypal attributes of an accountant, claiming that the finer points of bookkeeping can be interesting.

Mandy is married and has 3 children, of which one of her sons has Ectodermal Dysplasia. Mandy is a registered Nurse in Bournemouth, having worked in both the NHS and Community Setting as Director of Nursing. She now works as a Nurse Advisor in the private sector.

Mandy has been a Trustee since September 2001 after her son was diagnosed with Ectodermal Dysplasia. It is through her work in the community that she is able to advise and assist families in approaching Social Services with regard to air-conditioning. Mandy is also responsible for School Liaison in which she ensures schools acknowledge and understand the care needed for students who have Ectodermal Dysplasia.

Martin lives in London and has a young son, Harry. He is a Financial Planner at MJW Wealth Management.Nephew to Diana Perry, Founder of ED Society, Martin has seen the effects of ED first hand.

Outside of work Martin loves to stay fit, read and spend time with his family.